Sharp but subtle, Hafod has a rich texture and a complex and earthy flavour – perfect for adding to Welsh rarebit or eating with a slice of apple. The Hafod recipe was developed by Sam and Rachel Holden in 2005 after they were inspired by a recipe from Dora Saker’s 1917 book ‘Practical Cheddar Cheese-making’. The 75 Ayrshire cows on the farm produce a milk that’s perfect for high quality cheesemaking due to its rich and buttery texture. 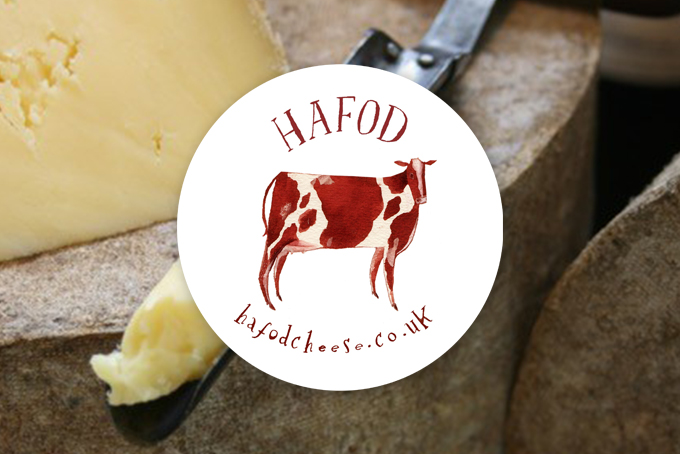 Hafod cheese started life in 2007 when farmer Patrick Holden joined forces with his son, Sam and daughter-in-law Rachel, who moved back to West Wales from London with the dream of making a truly special cheese. The origins of Hafod go back further, to the late Dougal Campbell, a close friend of Patrick’s. Dougal learned to make cheese in the Swiss Alps before moving to West Wales in the early 1980s, where he started making a cheese called T’yn Grug using milk from both his own herd and from Patrick’s. He went on to teach cheesemaking to several people, and his recipe formed the starting point from which Sam and Rachel eventually developed Hafod.

The cheese is made with raw milk from the farm’s 75 Ayrshire cows; Ayrshire milk is rich in butterfat and protein, and is widely regarded as being ideally suited to cheesemaking. Although the recipe for the cheese is very similar to that of a Cheddar, Hafod has distinctive rich, buttery, nutty flavours – indicative of the Swiss origins of the original recipe. The cheese is made in 10kg rounds, cloth bound and matured to 12 months, during which time it develops a traditional mould rind.