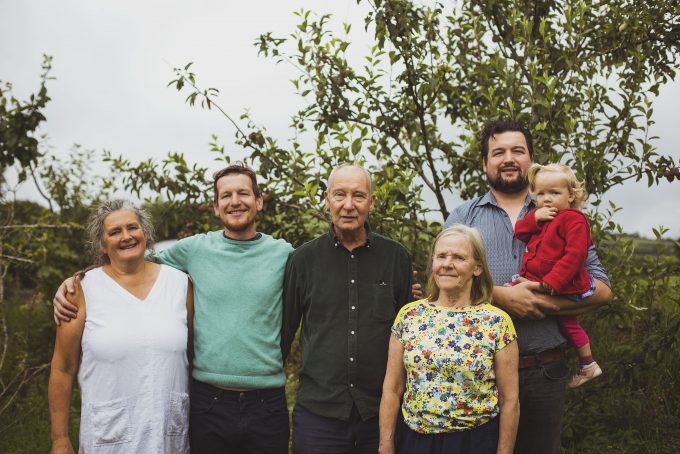 We’ve said it before and I’m sure we’ll say it again…. we’re incredibly fortunate to have some fantastic cheesemakers here in Wales. Many of them have had a tough time over the past few months, but they all have a history of innovation and determination, so we’re certain they’ll adapt to our ‘new normal’ and thrive again as we all come out of lockdown.

One of our favourite producers, Caws Teifi, have just reopened their farm shop in Ceredigion. They make wonderful raw milk cheeses including Celtic Promise, organic Halloumi and their eponymous Teifi. We have featured both the Celtic Promise and the Halloumi in our recent Clwb Caws subscription boxes.

Rob and Nessie from Caws Teifi (Rob is second from the left in the Caws Teifi family photo above – photo by Heather Birnie) have very kindly taken the time to write a blog piece for us, reflecting on the history of the family business and of raw milk cheesemaking in Wales more broadly. They also consider the impact that Covid 19 has had on Caws Teifi, and what the future might hold. Over to Rob and Nessie….

In the late 1970’s a younger generation of cheesemakers re-discovered the art of cheesemaking. Amongst those were Dougal Campbell and Leon Downey with their Tyn Crug and Llangloffan cheese, respectively. To be joined by us in 1982.

In 1981, my mum, dad and aunty came to Wales from The Netherlands with dreams of setting up a centre to teach self-sufficiency and organic farming practices. They bought Glynhynod farm, (Remarkable Valley yn Cymraeg) and set to work realising their vision. My mum, who trained as a cheesemaker with Mrs Vermeer, who made the first post-war organic farmhouse Gouda in the Netherlands started making our Teifi recipe soon after arriving in Wales.

Today my brother and I run Caws Teifi Cheese and our sister company Da Mhile which is the first organic farmhouse distillery in the UK. On the farm we also have a small beef herd, all in keeping with the original vision for Glynhynod.

Considering how mechanised and impersonal the vast majority of food production has become today, things have changed relatively little here at Caws Teifi Cheese. With our cheese still being made in small batches by hand, using local organic milk from a small herd we have managed to stay true to artisanal, raw milk cheesemaking traditions. We vehemently believe in keeping raw-milk cheese alive, due to the myriad health benefits for both people and the environment.  However, given the increasingly sanitised world we find ourselves in, this has not been easy. In 1989 the Minister of Agriculture tried to ban the sale of raw milk cheese and as a result the SCA (Specialist Cheesemakers Association) was born and thankfully the consumer’s freedom of choice was preserved. Besides having more depth of flavour raw milk cheese also has a much lower carbon footprint. In fact, it takes 3 times more energy to make pasteurised cheese than raw milk cheese.

The COVID-19 pandemic has been both a blessing and a curse for us. Production is down, because hospitality has closed, we hope this will pick up again once lockdown has been lifted. This has forced us to focus more on online sales and as a result we are in the process of upgrading our Caws Teifi Cheese and Da Mhile distillery’s websites. It has also re-affirmed our belief in being part of and supporting a resilient local food economy instead of relying on supermarkets. Without this local economy Caws Teifi Cheese would have struggled even more. I know this is the case for many other local food producers. We are deeply grateful and indebted to all our customers; the small local shops, online services, and farmers markets in Wales that have continued to support us. The last few months have also given us the opportunity to focus on renovating our farm shop which will be re-opening on the 6th July. We’ve also had more time to grow lots of veggies for our staff lunches and giving our small herd of Welsh Black Cows some extra cuddles!

Finally, I’d like to encourage everyone who has the opportunity and means to buy local, doing so means you are supporting your local farmers and food producers. Without your support they cannot survive. At Caws Teifi Cheese and Da Mhile Distillery our aim is the pursuit of excellence and to provide our customers with nutritionally high value food that is affordable, delicious and keeps us and our local economy healthy and connected.