A quick guide to Welsh cheese 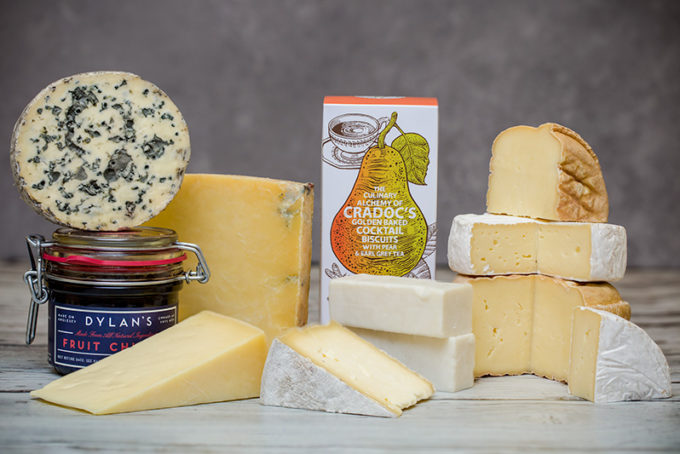 Wales is made for dairy farming: ample rainfall and acres of lush pasture have nurtured a long tradition of raising cattle, and Welsh cheese producers have naturally emerged to make use of all that excellent quality milk.

The Welsh cheesemaking tradition goes back hundreds of years, but as farmers have learned to diversify, the country’s cheese output has grown to a point where you can easily stock a whole cheeseboard with everything from pungent soft cheeses to lemony blues and crumbly Caerphillys.

When it comes to Welsh cheese, there is a lot to choose from, and I think the selection offered by The Welsh Cheese Company gives a great overview of the diversity, character and beauty of the cheeses produced in Wales,” he says.

These are unforgettable cheeses made by producers who are really passionate about their work. They hold their own against the finest cheeses from across Europe and deserve a wider audience. I’m delighted to be playing a part in that.

Here’s a quick low-down on our main suppliers.

Caws Cenarth is the oldest established producer of Welsh Farmhouse Caerffili (also known as Caerphilly), which it makes in several varieties including smoked and Garlic and Herb Caerffili and Smoked Caerffili. Carwyn has also developed new cheeses, including the Brie-like Perl Wen and a creamy blue, Perl Las – both beloved by chefs in Wales.

The company produces no less than 12 different cheeses, including eight different varieties of its acclaimed Teifi cheese. A Gouda-style cheese with a dense, smooth and creamy texture, it’s sweet and mellow when young but develops qualities similar to Parmesan when aged. Another sought-after product is their Celtic Promise cheese – a mild Caerphilly-type cheese which has won more awards than any other cheese in Britain.

A family-run cheese company based in the World Heritage site of Blaenafon, South Wales, The Blaenafon Cheddar Company is known for flavouring many of its cheeses with locally made alcoholic drinks, from whiskey to cider. The cheeses are handmade at the Blaenafon Cheddar Company’s shop in Broad Street, Blaenafon, and they’re all free from dried ingredients and artificial preservatives or colourings. The company’s Pwll Mawr cheddar is matured 300ft below ground at the bottom of a mine shaft at Big Pit mining museum.

Pant Mawr Farmhouse Cheeses is a family-run business established in 1983 when the Jennings family returned to Wales from the Middle East where they had helped set up some of the first commercial dairy enterprises in Libya and North Yemen. The company is based at the Jennings’ small traditional Welsh hill farm in the foothills of the Preseli Mountains, and uses locally produced milk and unique self-developed recipes to create its cheeses. These include the soft, tangy mead-washed Drewi-Sant; Caws Preseli a soft, mould-ripened cheese; and the light and creamy Caws Cerwyn.

The cheeses produced at Bodnant’s multi-award-winning Welsh Food Centre are made within 24 hours of milking cows that graze less than a mile away. These artisan cheeses are made to traditional recipes, with options ranging from a Caerphilly to the Aber range of cheeses including the beechwood-smoked Abermwg cheese; the creamy, rounded Caws Aberwen, which works beautifully with crispy bread and a good chutney; and the naturally coloured red cheese, Abergoch, which has a slight crumble and melts beautifully in toasties.

Set amid the beautiful scenery of North Wales, the Snowdonia Cheese Company was established in 2001 with the aim of creating a luxury range of cheeses. The company takes cheese brought down from the valley, and with the finest ingredients and care, produces its range of award-winning truckles. Options range from Black Bomber – a mature Cheddar – through to Red Devil, a classic Red Leicester warmed with a hit of chilli. Other options include the award-winning Pickle Power – a mature Cheddar with a pickled onion tang; and Ruby Mist – a mature Cheddar with warming hints of Port and Brandy. These are great cheeses to eat as they are or melt onto toast.

The Abergavenny Fine Food Company is a family owned business producing a wide range of traditional and flavoured cheeses. The company retains its traditional cheesemaking methods, producing small batches that are hand waxed for a handcrafted, artisan feel and taste.

For a clean, handmade flavour they use only locally sourced English and Welsh milk, and the company’s traditional craft methods give their fresh cheeses a truly distinctive character.

The cheese is made with raw milk from the farm’s 75 Ayrshire cows. Ayrshire milk is rich in butterfat and protein, and is widely regarded as being ideally suited to cheesemaking.

The recipe for the cheese originated locally, from the late Dougal Campbell, a close friend of Hafod Cheese owner Patrick Holden. Dougal learned to make cheese in the Swiss Alps before moving to West Wales in the early 1980s.

Although the recipe for the cheese is very similar to that of a Cheddar, Hafod has distinctive rich, buttery, nutty flavours – indicative of its Swiss origins combined with the farm’s raw Ayrshire milk.

Rhyd y Delyn is a family run dairy farm producing award winning artisan cheese from its own cows’ creamy milk. The pedigree Holstein Friesian cows are all bred on the farm and graze on lush grass pasture during the spring and summer months.

The cheese is made in a small modern dairy on the farm less than 30 metres from where the cows are milked. The cheese is made using vegetarian rennet, making it suitable for vegetarians. All the ingredients are natural, including the acclaimed Anglesey Halen Mon Sea Salt, which is used in their hard cheese, Caws Caled – a traditional Welsh farmhouse cheese similar to a Caerphilly, but with the texture of a matured cheddar with sweet undertones.

Y Cwt Caws is a family-run artisan cheesemaking business based on the family farm at Cors yr Odyn, Dulas, Anglesey.

All their cheeses are produced entirely by hand, using the milk from their mixed herd of Saanans, Toggenburgs and Alpine goats. ‘Ffetys’, a salad style cheese, won gold at the True Taste of Wales 2008/09 awards, while their Môn Wen Camembert won two gold stars in the Great Taste awards. Other products include a hard cheese and versatile soft cheese balls.

Trethowan’s Gorwydd (pronounced Gor-with) Caerphilly is a mature Caerphilly made to a traditional recipe using raw (unpasteurised) cow’s milk and a traditional rennet.  Despite being considered a Welsh cheese, there is a long history of Caerphilly being made in the West Country where the company is based, and their particular recipe originated in Somerset at the beginning of the 20th century.

While Caerphilly was traditionally sold very young, Trethowan’s cheese is matured at the dairy for two to three months. This period of maturation allows a natural rind to develop, adding depth of flavour to the tastes and textures that run through the cheese. The centre is firm and moist, and has a fresh lemony taste, while the creamy layer beneath the rind (known as the “breakdown”) is richer and more savoury.