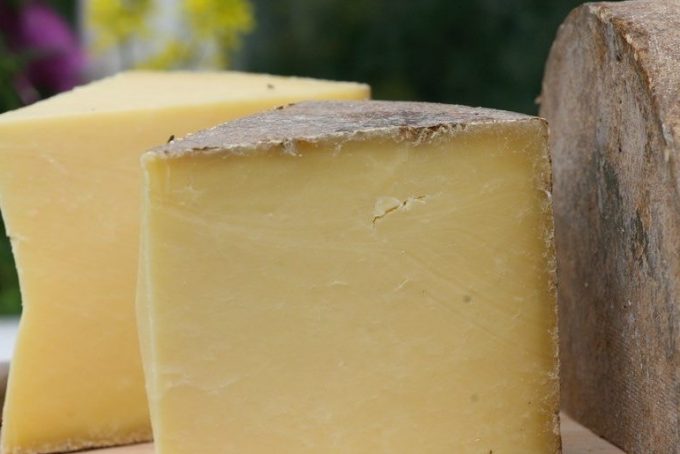 We’re fascinated by our cheese producers’ stories. The more we have spoken to them, the more they have revealed. It’s been inspirational to discover how environmentally conscious they are and how, in many instances, their businesses work in harmony with other life on the planet whilst striving to create the very best quality cheese possible.

This month, Patrick and Becky of Holden Farm Dairy have very kindly taken time out of their busy schedule to answer our questions. Holden Farm Dairy makes a superb cheddar called Hafod, and is based on Bwlchwernen Fawr, the longest standing registered organic dairy farm in Wales, having been certified since 1973. Owner, Patrick Holden has been based at the farm since the early 70’s. In the 80s, he became increasingly involved with the organic movement, specifically the Soil Association, where he was Director until 2010. It was here he met his wife, Becky, who now also runs the farm as well as bringing up their four children.

What is your role within Holden Farm Dairy and how long have you been involved for?

Becky and I are partners in the farm and cheesemaking operation.  I came here 46 years ago in a 1970s commune which was part of the ‘back to the land’ movement.  Becky joined me later in the early 2000. Since then we have made a lot of progress in developing the farm as a self-sufficient and self-sustaining unit, along the lines of circular economy principles. Currently we are transforming about two-thirds of the milk of our 80 cows into Hafod, a single farm cheddar-style raw milk cheese.

As one of a small number of unpasteurised cheesemakers in Wales, what particular qualities do you think the raw milk brings to Hafod?

The milk is a reflection of the unique ecology of this place – its soil, the biodiversity of the pastures, the health of the cows, – everything we have done here and are doing has a daily influence on the milk quality which pasteurisation would at least, in part, diminish. There is no doubt that the best cheeses you will ever taste will be from raw milk, but of course that makes it all the more important to ensure that the milk is the highest possible quality.

How does the history and development of Bwlchwernen Fawr over the past 40 years, from its time as a community farm to it becoming the first organic certified dairy farm in Wales, play a role in the ethos of the business and cheesemaking today?

The history of this place and all the various chapters of our involvement with the farm have served as foundations for the development of the cheese. Ever since we arrived here, we have tried to farm as sustainably as possible, but of course we’ve made lots of mistakes along the road. We believe that the quality of the milk that we are producing today is the best ever. We haven’t seen a single case of mastitis in our milking herd for nearly a year now, which is a sure indicator of positive health. Everybody talks now about the microbiome: the science of the bacterial culture which exists in our own stomachs, but the principle of the microbiome is playing out everywhere. The ecology of this place and all the interdependent relationships that make up this farm form the macrocosm, whereas the microcosm is the soil, the rumen (stomach) of our cows, and the biome of the cheese room: all these form part of one interconnected whole.

Can you describe a typical day at Holden Farm Dairy?

We have to milk early – it’s normally cows in and the first clusters on by 5 am. By 6.30am the milking is completed and, on a cheesemaking day, transferred into the cheese vat, at which point our skilled team of cheesemakers commence the 10-hour process of transforming the milk into Hafod cheese. Tess or Jos (who also work on the farm) lead the make, ably assisted by Debs or Lynda. The team rotate between the make room, maturation store and dispatch and office, ensuring continuity, great care and attention to detail and understanding of every aspect of Hafod.

As the cheesemakers look out of the window, they can see the daily tasks of the farm continuing. The cows go out to grass or in the winter are fed with hay and silage, the yards are cleaned, manure is spread, and in the Summer, pastures are mown and turned into hay and silage for the winter months. It is a beautiful cycle working in harmony with nature and the seasons. 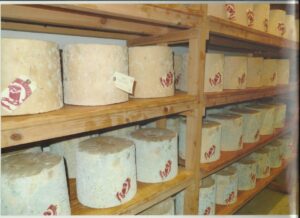 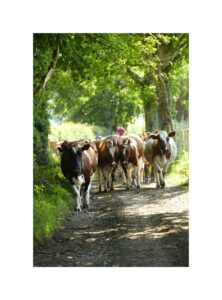 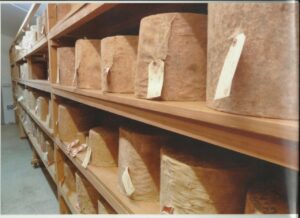 What would you say are the most important elements contributing towards Hafod’s distinctive characteristics that help create such an outstanding Cheddar?

The raw materials we have to work with are obviously critically important; these are the farm itself; the unique biodiversity of our grassland, our policy of being as self-sufficient as possible, not just with the grass, hay and silage but also the grains that the cows eat; the Ayrshire breed, which is particularly well suited for cheesemaking; our excellent and blessed team of cheesemakers, and the massive and ongoing support that we receive from the extended community of artisan cheesemakers and cheese mongers throughout the UK and beyond.

Does the grass on the farm and the stewardship of the cows play a large role or is it primarily down to the processes used in dairy and the skills you’ve mastered over the years?

This is a fascinating question! Perhaps we can use the analogy of a chef in a fine dining restaurant. There’s no doubt that the very best chefs can transform even the blandest of ingredients into a very tasty, sometimes even delicious meal. But those same chefs will tell you that to reach the very highest culinary standards, the raw materials really matter. I’m speaking here of the vegetables, cheeses, meats, and all the other ingredients which will make up really exceptional cooking.  It is exactly the same with cheesemaking. Of course, the cheesemaker’s art is a prerequisite for a fine cheddar or any other cheese for that matter. Without really exceptional milk, it will always be difficult to reach the highest level of quality. We are certainly aspiring to get both elements of this alchemy in place, although of course it is a journey never completed.

Which food or drink do you most like to pair with Hafod?

On the drink front I would say natural wines and ciders. In other words, those which have undergone the equivalent process of artisan cheesemaking. Although, having said that, I do like west coast malt whiskies, particularly Lagavulin and Talisker, and I think they would be pretty good with Hafod. On the food front, this may seem a bit simplistic but, for me, a cheese sauce made with Hafod is completely delicious and I like to combine the sauce with home-reared whey-fed veal ragu in a lasagne. Alternatively, if there’s less time, Hafod in Welsh rarebit on sourdough is very good!

What is your favourite Welsh cheese (aside from Hafod)?

Tess, our lead cheesemaker, used to make Gorwydd Caerphilly near here before they moved to Somerset and we would love to try making a few small batches of Caerphilly. It’s a cheese that could work well within our existing processes and infrastructure. Brefu Bach, a new cheese made by Carrie Rimes near Bethesda, is absolutely delicious.

What is your view on the current state of cheesemaking in Wales?

It’s brilliant that as well as the established Welsh farmhouse cheese makers, there are a few wonderful new artisan cheesemakers emerging. Carrie Rimes is an exciting addition, creating a fine cheese and working to source the best raw sheeps milk possible from native breeds, grazing on species rich pastures. However, the economic climate for making a success of artisan cheesemaking is still very difficult even though our extraordinary landscape can produce such wonderful milk and dairy products. This is because most dairy farmers are having to sell milk at or below the cost of production to commodity dairy processing. I’m optimistic though that the opportunity for a more joined up and localised food system in Wales feels possible, enabling a more direct connection between producer and consumer and hopefully giving small family farms the confidence to add value to or sell their products more directly.

What’s next for Holden Farm Dairy?

Further along we would love to make another cheese, for instance a Caerphilly or maybe a dale-type cheese, but in the short term we’re just going to concentrate on making Hafod as good as it can possibly be, by continually asking questions of our farming and cheesemaking. It’s a journey of curiosity and enquiry. We’re really excited by our latest experiment of leaving the cloth binding off and just lard coating the cheeses as they come out of the press. This seems to give Hafod even more opportunity to self-regulate during maturation in the store – a ‘live’ food responding to its environment. On the farming front, it’s interesting that although our cheese is certified organic, it sells mainly on the provenance, meaning the story behind our farming system and, in that connection, we will be striving ever harder to ensure that the story behind our farming system addresses climate change, enhances biodiversity and operates within the planetary boundaries, which everyone now realizes, we have been exceeding during the period of industrial farming. We would like to think that eventually all farms could adopt more sustainable and self-sufficient systems – this would be good for the planet and it would result in lots more artisan cheese! 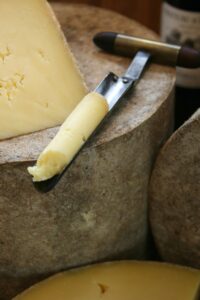 If you’d like to try Hafod, you can buy it HERE.

To try the supreme Gorwydd Caerphilly, mentioned above, click HERE.