Say hello to our new Seaweed Gin and Cheese Hamper 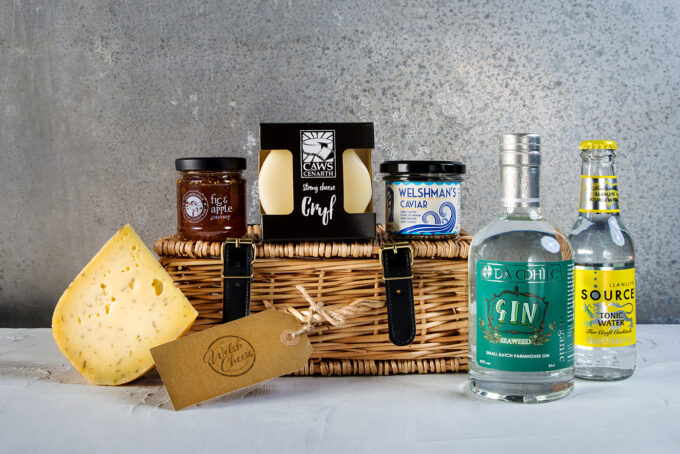 If, like many, you have rejoiced at the recent surge in popularity and availability of an abundance of gin varieties, then this is certainly the hamper for you!
Buy the hamper HERE.

We’ve paired a superb gin with some delicious Welsh cheese and accompaniments to please the most discerning gin lover. This exciting hamper has been composed in celebration of one of Wales’ most famous delicacies, laver seaweed.

Organic Dà Mhìle seaweed gin is made in Ceredigion, West Wales. It’s the result of a glorious infusion utilising seaweed that is hand-collected from the Celtic coast. The result is smooth and aromatic with a hint of sea salt.

Dà Mhìle Distillery was established in 2012 on the founders’ family farm in Ceredigion, West Wales by John Savage-Onstwedder. John is also one of the founders of Teifi Farmhouse Cheese, November’s Producer of the Month. Dà Mhìle seaweed gin was launched on 1st March 2014 (St. David’s Day) and was proudly created by John’s son, John-James, who now runs the distillery.

Llanllyr Source is a natural spring water company started in 1999. The company was started by the member of a family that has organically farmed the land in Llanllyr, Talsarn, West Wales, for the last 300 years. Being activists for sustainable land management and knowing the incredible quality of the water, the family began the Company as a farm biodiversity project.
Llanllyr Source Tonic Water is made with natural quinine. It’s designed to bring out the natural botanicals in the finest spirits which is why we believe it to be the perfect partner for this seaweed gin. 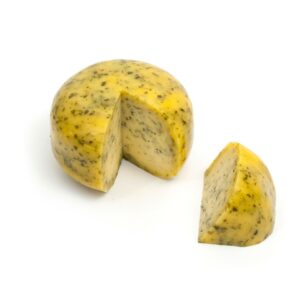 Teifi Seaweed – a traditional flavoured Gouda with the addition of locally harvested seaweed. The seaweed adds a distinctive saltiness, and the cheese possesses a mellow flavour which matures with age. 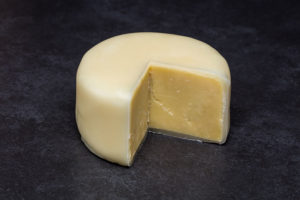 Caws Cryf – a strong, sharp extra mature Cheddar made by Caws Cenarth in Carmarthenshire. It is a wax-covered cheese with a rich flavour and a creaminess typical of Caws Cenarth cheese.

Welshman’s caviar is a dried and toasted seaweed handpicked from the Pembrokeshire coast. Laver seaweed has quickly gained recognition for its wealth of vitamins and minerals as well as its unique depth of flavour when added to any dish. ‘Welshman’s caviar’ was apparently coined by Richard Burton for his love of laverbread. It’s made by The Pembrokeshire Beach Food Company who suggest trying it in soups, stir fires and even on scrambled eggs!

Fig and Apple Chutney is a brand new mouth-watering sweet and fruity chutney. It’s made from a traditional recipe unique to the Snowdonia Cheese Company and produced in North Wales.

Shop for other hampers here or take a look at the other cheeses on offer by Caws Teifi here.