Cosyn Cymru – Producer of the Month 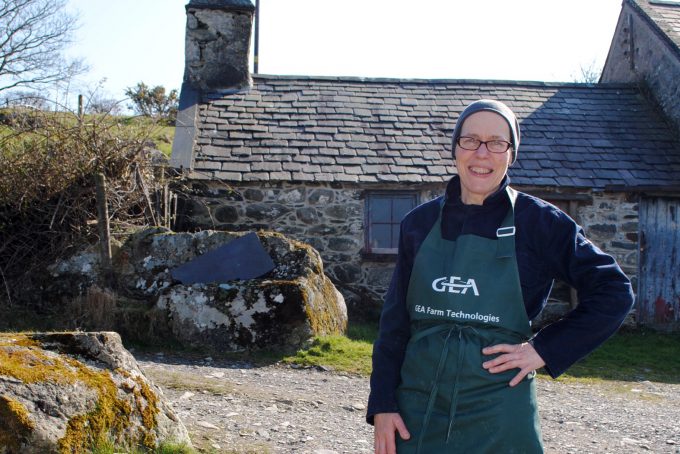 Cosyn Cymru – meaning ‘Welsh truckle’ – specialises in unpasteurised ewe’s milk cheese, yoghurt and ice cream. Owner Carrie Rimes honed her cheesemaking skills while volunteering at fromageries in central France, before returning to North Wales to set up her dairy in the foothills of Snowdonia four years ago. We caught up with Carrie to hear about her growing business.

Why did you start Cosyn Cymru?

Growing up on a farm, I’d experimented with cheesemaking as a child. But it wasn’t until many years later, when my son Patrick left home, that I decided to go for it. I was also looking for a career change after 24 years working in conservation – so the timing seemed right.

How did you learn about cheesemaking?

I decided to go to France to gain experience. I spent some time WWOOFing (volunteering through World Wide Opportunities on Organic Farms) on four different farms, learning traditional methods and local recipes, then returned to work on one farm in Auvergne, where the owner Raphael let me take charge of the dairy! Without that experience I wouldn’t be where I am now. I was very surprised when years later, my cheese Brefu Bach was exported back to France, to Paris via Neal’s Yard in London, and I received brilliant feedback! I’m exceptionally proud to have the French seal of approval. 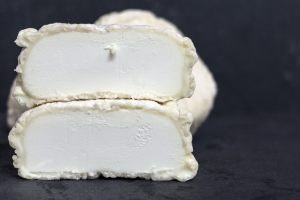 Where does the name Brefu Bach come from?

The name Brefu Bach has numerous meanings. It’s imperfect Welsh for ‘little bleat’, reflecting the fact that it’s a young ewe’s milk cheese. But it also echoes the French name for little sheep’s cheese, ‘petit brebis’ – and the double ‘B’ pays homage to BB, a cheesemaker I met in France, whose lactic cheese recipe was the inspiration for my own Brefu Bach.

What do you like to eat with Brefu Bach?

Brefu changes with age, so it depends. Younger, creamier ones go well on a savoury cheese board, but also pair beautifully with honey or fruit purees. The more mature Brefu is dryer, so goes nicely in salads or mixed into a stir fry. You can bake Brefu like camembert too – delicious!

For me, what pleases me more than anything is being able to work with local, small-scale, low-intensity producers who care about the environment and animal welfare as much as I do. Large-scale intensive farming isn’t the answer. We’re trying to create a system where rural communities can thrive, remaining economically viable while keeping impact low. If I can make a half-decent cheese in the process, even better!

How has coronavirus impacted you?

I’ve been a good deal luckier than most. While demand from restaurants and cafes shut down overnight, mail orders have been doing well and local sales have skyrocketed. I worked with Alan, one of my milk producers on the Llŷn Peninsula, to manage the unpredictable demand for milk. He left the lambs with their mothers for longer than usual; this meant he only milked the excess, but that milk was of very high quality. Meanwhile I diverted more milk into longer-lasting cheeses. With this mixture of forethought and luck we’ve done OK.

What’s next for Cosyn Cymru?

I’d like to do something with whey. At the moment my whey (created during the cheesemaking process) feeds pigs at local smallholdings. But it makes fantastic ricotta, so I could try that – or I could learn to make whey butter! The main goal at the moment is to open my new dairy in Bethesda, which should happen in 2021. It will be bigger – which is great as I’ve outgrown my current facility – and I’m hoping to open a cafe on site so that I can welcome guests who are curious about the cheesemaking process.