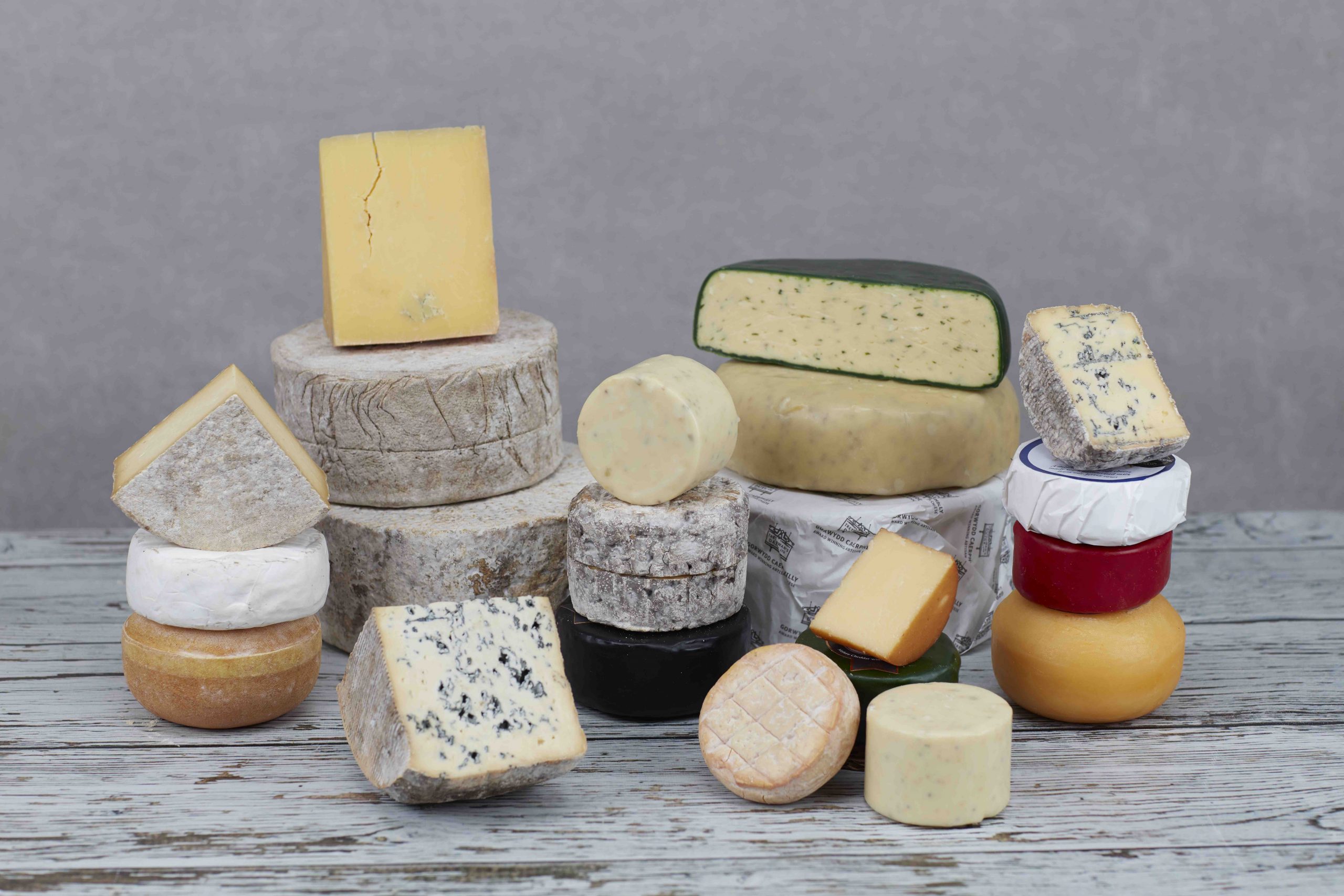 Traditional cheesemaking is a complex art form – so much so that there’s a whole range of terms used to describe the techniques and elements involved, and of course, the resulting flavours.

Do you know the difference between a bloomy rind and a buttery paste? Want to know your curds from your casein? Swot up on your cheese vocabulary with our A-Z of cheese terminology.

Refers to the acid levels in the cheese, measured in pH. The lower the pH, the more acidic the cheese.

The process of aging cheese.

A white and fluffy cheese rind often seen on creamy cheeses such as Brie and Camembert. Our cheeses with bloomy rinds include Angiddy, Cenarth Brie and Brefu Bach.

A pungent cheese with blue/green spots or veins of mold running through it. Discover our blue cheeses.

Cheeses with a buttery flavour are creamy and rich; buttery textures indicate that the cheese is soft, but not runny.

Proteins found in milk, which coagulate during the cheesemaking process.

A finely woven cotton fabric used to strain and wrap freshly made cheeses.

A specialist who sells cheese and other dairy products, with expertise in their field.

The process that occurs when milk turns from liquid to a semi-solid state.

The creamy layer of cheese between the rind and paste – often seen on bloomy-rinded cheeses.

Used to describe a cheese that breaks apart easily.

The solids formed when milk coagulates.

The process of slicing curds into smaller pieces to release whey.

Drying dehydrates the surface of the cheese to form a rind.

The act of pressing and molding new curds into a set shape.

The initial curd created by adding rennet during the cheesemaking process.

Aging cheese in a controlled environment, to optimise flavours and longevity.

Not too mild, not too strong. A decent flavour with no sharpness.

Furry fungi which grow on certain cheeses, helping to develop the rind and add flavour. Also the containers cheesemakers use to shape cheeses into their final shape.

Produced without the use of chemical fertilisers, pesticides of other artificial chemicals. Discover our organic cheeses.

The interior of a cheese, beneath the rind and creamline.

Milk that has been treated with heat to kill viruses and bacteria, also stripping milk of certain good types of flora.

Putting cheese under weights or some kind of pressure, to squeeze out moisture and press the cheese into shape.

Raw milk has not been pasteurised, or treated with heat in any way.

A coagulant used to solidify milk. Often sourced from the stomachs of calves, kids or lambs, there are now vegetarian options available.

The exterior skin of cheese.

Like fruit, cheese ripens – a ripe cheese has been aged to perfection.

Adding salt to the curd to release moisture and slow the growth of bacteria and acidity.

A bacterial culture that converts lactose into lactic acid, acidifying the milk early on in the cheesemaking process.

Describes cheese which is mouthwateringly acidic.

A characteristic taste and flavour imparted to a cheese by the environment in which it is produced.

Milk which has not been pasteurised. Discover our unpasteurised cheeses.

A cheese that has been bathed in brine, whey or alcohol to prevent moulds from growing on the outside of the cheese, and allowing other bacteria to grow to add flavour. Discover our washed rind cheeses.

A cheese that has been covered in an inedible wax coating.

A triangular chunk of cheese cut from a larger wheel.

The liquid left over once milk has coagulated.

A mild cheese that has been matured for up to 30 days.