Who are Caws Teifi Cheese?

Caws Teifi Cheese was founded by John and Patrice Savage-Onstwedder and Paula van Werkhoven in 1981. Located in Ceredigion, Caws Teifi Cheese is the most highly awarded artisan cheesemaker in Britain. Their cheeses have won numerous first prizes and gold medals at shows from The Royal Welsh to The World Cheese Awards.

Where it all began…

In 1981, co-founders of Caws Teifi Cheese, John, Patrice and Paula moved to Wales from their native Holland. Their dream was to set up a centre to teach self-sufficiency and organic farming practices. They purchased Glynhynod Farm (meaning Remarkable Valley) and set about making their dream a reality. Patrice, who trained as a cheesemaker in Holland, started creating the Teifi recipe very soon after arriving in Wales. In 1982, Caws Teifi Cheese began producing and they are now the longest established artisan cheesemaker in Wales.

Where they are today…

Today, Caws Teifi Cheese is run by John and Patrice’s two sons, John-James and Robert (Robert second from left, John-James far right).  In 2020, they renovated their on-site farm shop where they sell a wide variety of local produce. They also have a programme of events on the farm where they are reviving the original mission to educate people on organic farming and how to be self-sufficient. 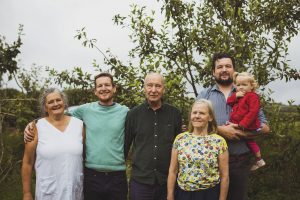 The brothers also run Da Mhile Distillery. In 2012 they opened their very own distillery on their farm making it the first organic farmhouse distillery in the UK. If you would like to try their organic Welsh spirits, Da Mhile Seaweed Gin features in our Seaweed Gin and Cheese Hamper.

On the farm, they also have a small beef herd of Welsh Black Cows. Robert and John-James, along with the help of their small team are continuing to carry out their parents’ and aunt’s 40 year old vision of the farm and Caws Teifi Cheese.

Their cheese is made by hand in small batches, using local organic milk. Even though food production has become much more mechanised, they have managed to stay true to artisanal, raw milk cheesemaking traditions. Caws Teifi Cheese is created using milk from two local suppliers. One located on the wild coast of Ceredigion who they use for the majority of their cheese and one inland, on the border of Ceredigion and Carmarthenshire who they use for their Organic Welsh Halloumi.

A day in the life of Caws Teifi Cheese

Fresh raw milk arrives at 7am and is then pumped into their traditional Dutch style cheese vat. The milk is then heated, and a special starter culture is added to it in order to activate the milk. After more heating, rennet is added to coagulate the milk, turning it into a jelly. This is then cut, which separates the solid (curd) and liquids (whey). The curds are then put into moulds and gain their shape when pressed. The cheese is lastly salted and ready for maturation. This process is done every day along with endless paperwork and constant cleaning and disinfecting. However, it is all made worth it when they get to the point of cheese sampling at the end of the day! 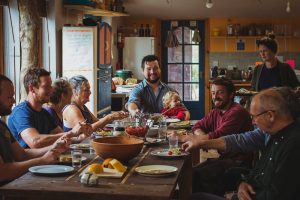 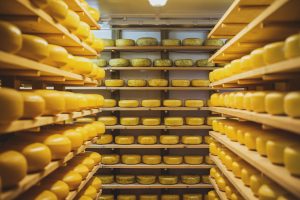 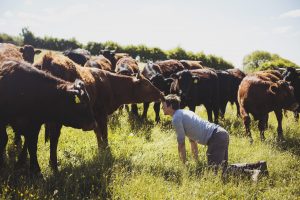